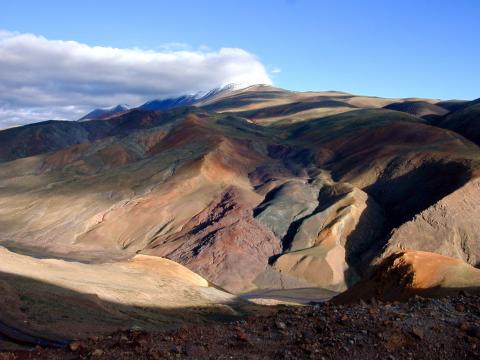 Students in the courses presented on this site may begin by learning fundamentals of basic grammar and key vocabulary, and move on to reading and translating texts in Classical Tibetan. Units teach content relevant to producing scholarship in Religious Studies, History, or Linguistics using sources in Classical Tibetan. This program was developed by a team based at the University of Toronto, Canada, and the courses were delivered asynchronously at the University of Toronto for the first time in 2016-17.

By the end of a year with Nettle Classical Tibetan, students should be able to:

Materials and exercises are organized into units to support ease of access and progression through sequenced learning activities. Units include targeted vocabulary lists and quizzes; one to three short video tutorials on grammar; an occasional video on contextual information; and problem sets or assignments focused on the unit's topic(s).

The first twelve-week introductory course is based on Joe Wilson's text, Translating Buddhism from Tibetan. The intermediate level course modules now available work with an already deciphered (tagged) Classical Tibetan digital text of the lifestory of Milarepa, with online exercises or worksheets for practice and testing. The source text for these modules are provided by the Tibetan in Digital Communication project, which was funded by the Arts and Humanities Research Council in the UK (2012-2015).

Classical Tibetan is a language of scholarship for populations in the current states of India, Russia, China, and Mongolia, Nepal and Bhutan, and has been a medium of communication in the region for over a millennium. It is critical for understanding interactions between South, Central and East Asia both in the past and in the present. Tibetan has seen massive literary production since the eighth century, with a corpus of literature that greatly exceeds those of most European classical languages. Many Indian and Chinese works have only survived as translations in Tibetan. Tibet also constitutes one of the four most important sources for understanding Buddhism, one of the world's major religious civilizations. We are sure that you will find learning Classical Tibetan both profitable and enjoyable!