Chapter 1: Milarepa's birth and his practicing the truth of suffering 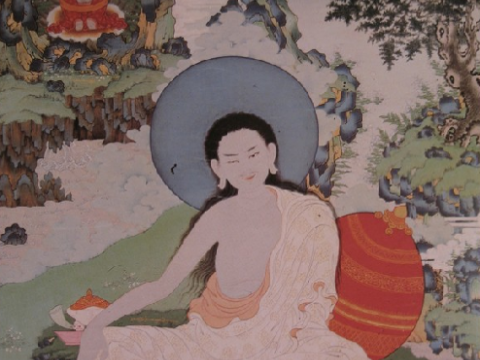 This life story begins with Rechungpa asking Lama Milarepa to tell the story of his life. In this chapter, Milarepa tells of his family origins, his birth, and the great suffering of his youth following the death of his father.

In this Unit, you will read the first chapter of The Life while learning new grammatical constructions and expressions common in Tibetan biographical literature. You will also learn a traditional grammar verse about the particles used to mark the second, fourth, and seventh cases, and practice word sequencing for some short Tibetan sentences.

If you are not familiar with the genre of biography in Tibetan literature, you may wish to begin your study by reading sections of Tibetan Literature: Studies in Genre. To learn more about the Tibetan poet and meditation master, Milarepa, begin with Andrew Quintman’s lecture on “Reading and Writing the Life of Tibet’s Great Saint,” available below.

When you’re ready to study Chapter One, begin with 1.1 Grammar Preview and 1.2 Sentence Building. With those, you should be ready to try 1.3 Reading & Translation. If you have installed Monlam’s Tibetan-English dictionary on your computer, you will be able to highlight and reveal unknown vocabulary right in your browser. You should also memorize the Tibetan grammar verse and review your grammar with 1.5 Sequencing Practice. Last but not least, practice your pronunciation at 1.6 Reading Aloud.

Professor Garrett demonstrates sentence building with a summary of Chapter 1.

On the seven la don

Su, ra, ru, du, na, la and tu
Are the seven 'la-equivalent' (la don),
They are used with the second, fourth and seventh cases,
And with ‘identity’ and the ‘temporal.’
su follows a sa, tu is used after ga, ba and da-drak,
du is used after nga, da, na, ma, ra and la,
Syllables ending in ‘a or without a suffix take ra and ru.