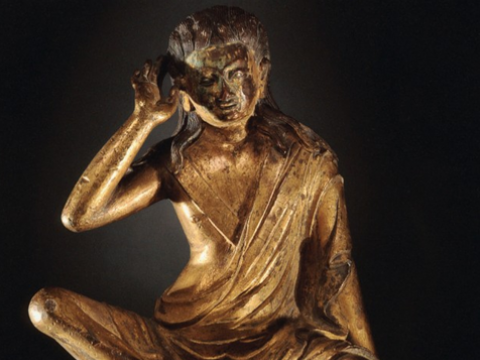 A statue of Milarepa at Himalayan Art.

In Chapter 2, Milarepa tells about his study of black magic. In this Unit, you will read the second chapter of The Life while continuing to learn grammatical constructions and expressions common in Tibetan biographical literature. You will also memorize a traditional grammar verse about the case particles that mark the third and sixth cases, and practice word sequencing for some short Tibetan sentences. A video lecture by Professor Andrew Quintman, entitled "The Life of Crime in a Life of Liberation: Murder as a Precursor to Enlightenment," provided below, will offer a scholarly context for Milarepa's incredible story.

When you’re ready to study Chapter Two, begin with 2.1 Grammar Preview and 2.2 Sentence Building. With those, you should be ready to try 2.3 Reading & Translation. (If you have installed Monlam’s Tibetan-English dictionary on your computer, you will be able to highlight and reveal unknown vocabulary right in your browser.) You should also memorize the Tibetan grammar verse and review your grammar with 2.5 Sequencing Practice. Last but not least, practice your pronunciation by following along, reading out loud, at 2.6 Reading Aloud.

Professor Garrett demonstrates sentence building with a summary of Chapter 2.

On the third and sixth case markers

The five of gi, kyi, gyi, ‘i and yi
Are the connective particles of the sixth case.
The same five with the ending sa
Are the third case, the agentive.
They are applied as follows: na, ma, ra and la take gyi;
da, ba and sa take kyi; ga and nga take gi;
Syllables ending in ‘a or without a suffix take ‘i and yi.

2.7 The Life of Crime in a Life of Liberation

Professor Andrew Quintman's lecture,"The Life of Crime in a Life of Liberation: Murder as a Precursor to Enlightenment," presented in 2011 at Hendrix College