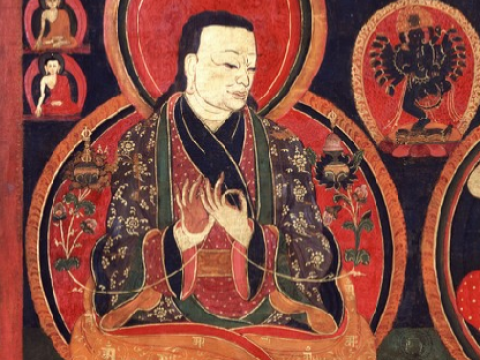 In Chapter 4, Milarepa finally meets his lama, Marpa the Translator. In this Unit, you will read the fourth chapter of this abridged life story while continuing to learn new grammatical constructions and expressions. You will memorize a traditional grammar verse about continuative particles, and practice word sequencing for some short Tibetan sentences.

When you’re ready to study Chapter Four, begin with 4.1 Grammar Preview and 4.2 Sentence Building. With those, you should be ready to try 4.3 Reading & Translation. You should also memorize the Tibetan grammar verse, review your grammar with 4.5 Sequencing Practice, and practice your pronunciation by following along with 4.6 Reading Aloud. Finally, in 4.7 you can watch the second part of a two-part video lecture by the Gyalwang Karmapa, speaking in New Delhi in 2014, about the significance of Milarepa's life story for Buddhist practitioners.

Professor Garrett demonstrates sentence building with a summary of Chapter 4.

On the continuative particles

te, de and ste are the three continuative particles.

and syllables without a suffix, ste ["te with a sa"] is used.

4.7 The Gyalwang Karmapa on the Essence of Milarepa's Life Story

Part 2 of a lecture by the Gyalwang Karmapa, in New Delhi in 2014, about the significance of Milarepa's life story for Buddhist practitioners.