Chapter 9: Meditating in the mountains 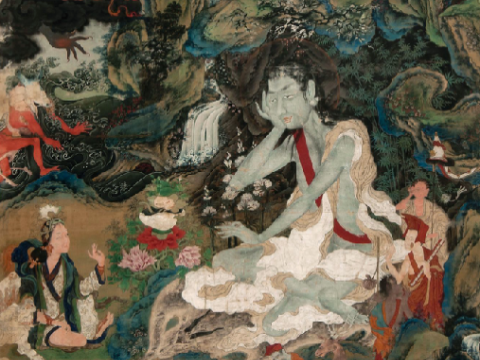 Milarepa, clad in white cotton, with his right hand cupped to his ear in a gesture
of singing and his body discoloured from a diet of only green nettles.
From Himalayan Art.

In Chapter 9, Milarepa returns to his homeland. In this Unit, you will read the ninth chapter of this abridged life story while continuing to learn new grammatical constructions and expressions. You will memorize a traditional grammar verse about concluding particles and practice word sequencing for some short Tibetan sentences.

When you’re ready to study Chapter Nine, begin with 9.1 Grammar Preview and 9.2 Sentence Building. With those, you should be ready to try 9.3 Reading & Translation. You should also memorize the Tibetan grammar verse, review your grammar with 9.5 Sequencing Practice, and practice your pronunciation by following along with 9.6 Reading Aloud. Finally, in 9.7 you will learn about the Buddhist Digital Resource Center, which was until recently called the Tibetan Buddhist Resource Center, and how to search for Tibetan texts in their online library.

Professor Garrett demonstrates sentence building with a summary of Chapter 9.

Go, ngo, do, no, bo, mo, ‘o,
And ro, lo, so, to are the concluding particles,
Also called the ‘terminative’ or ‘paired concluding.’
to is used with a da-drak and ‘o where there is no suffix.
The others match the final letters of the preceding syllable.

9.7a History of the Buddhist Digital Resource Center