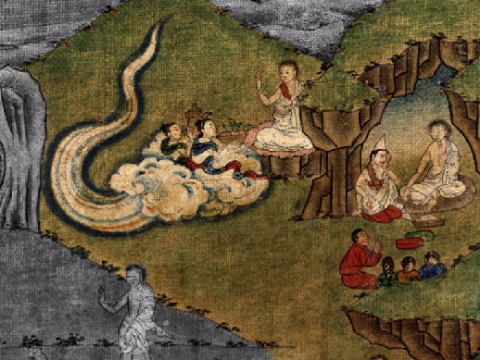 In Chapter 8, Milarepa returns to his homeland. In this Unit, you will read the eighth chapter of this abridged life story while continuing to learn new grammatical constructions and expressions. You will memorize a traditional grammar verse about nominalizing particles and practice word sequencing for some short Tibetan sentences.

When you’re ready to study Chapter Eight, begin with 8.1 Grammar Preview and 8.2 Sentence Building. With those, you should be ready to try 8.3 Reading & Translation. From this Chapter onwards, there will be no verb or noun hints. You should also memorize the Tibetan grammar verse, review your grammar with 8.5 Sequencing Practice, and practice your pronunciation by following along with 8.6 Reading Aloud. Finally, in 8.7 you may view a short introduction to the Tibetan collection at the University of Toronto.

Professor Garrett demonstrates sentence building with a summary of Chapter 8.

Lauran Hartley of Columbia University discusses the Tibetan Collection in the library at the University of Toronto.