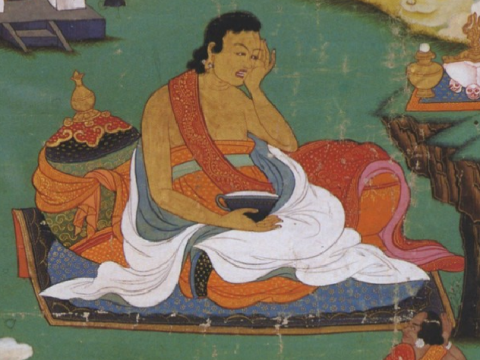 Scenes from Milarepa's life, from a collection on Himalayan Art.

In Chapter 10, Milarepa's life comes to an end. In this Unit, you will read the final chapter of this abridged life story. You will memorize a traditional grammar verse and practice word sequencing for some short Tibetan sentences.

When you’re ready to study Chapter Ten, begin with 10.1 Sentence Building (no Grammar Preview this week!). With those, you should be ready to try 10.2 Reading & Translation. You should also memorize the Tibetan grammar verse, review your grammar with 10.4 Sequencing Practice, and practice your pronunciation by following along with 10.5 Reading Aloud.

Finally, in 10.6 you will watch three videos on the importance of Tibetan language preservation. For more on the hip-hop video in particular, see an article on this video on the Smithsonian Institution website.

Professor Garrett demonstrates sentence building with a summary of Chapter 10.

The forms ra and ru, ‘i and yi or ‘ang and yang
May change to accommodate lines of verse.
The same principle determines whether or not
There is a dot (tsheg) before ‘o, ‘u and ‘am.

10.6a Keeping up the Language, From Varanasi to Google

For Yeshi Jigme Gangne, a Tibetan working at Google in New York, Googling in Tibetan is not just about convenience. It's about the survival of a language and culture of global importance.

10.6b A Tibetan's Journey for Justice

Worried about the erosion of Tibetan culture and language, one man takes his concerns to Beijing, hoping media coverage and the courts can reverse what he sees as a systematic eradication.

10.6c Sounding the Mother Tongue: Tibetan Hip-Hop on the Roof of the World