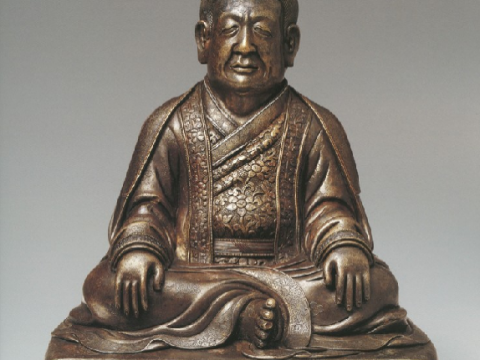 In Chapter 7, Milarepa continues to try to satisfy the demands of his teacher, Marpa, until in despair he leaves to study with another teacher. In this Unit, you will read the seventh chapter of this abridged life story while continuing to learn new grammatical constructions and expressions. You will memorize a traditional grammar verse about indefinite particles and practice word sequencing for some short Tibetan sentences. You will also learn how to use a Tibetan dictionary.

When you’re ready to study Chapter Seven, begin with 7.1 Grammar Preview and 7.2 Sentence Building. With those, you should be ready to try 7.3 Reading & Translation. You should also memorize the Tibetan grammar verse, review your grammar with 7.5 Sequencing Practice, and practice your pronunciation by following along with 7.6 Reading Aloud. Finally, in 7.7 you will learn how to look up words in a Tibetan dictionary.

Professor Garrett demonstrates sentence building with a summary of Chapter 7.

ci, ji, su and gang are indefinite particles.
ci is used before zhig, ste, slad, ‘dra and phyir.
ji is used before snyed, srid, ltar, bzhin and skad.
su applies to people only, but gang is universal.

Frances Garrett discusses the importance of using print dictionaries in Tibetan Studies research, and gives a quick overview of how to look up words.