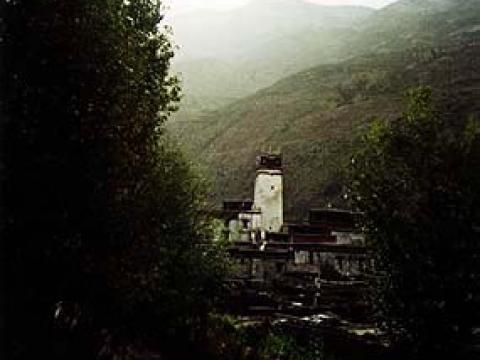 In Chapter 5, Milarepa tries desperately to satisfy the demands of his teacher, Marpa. In this Unit, you will read the fifth chapter of this abridged life story while continuing to learn new grammatical constructions and expressions. You will memorize a traditional grammar verse about the particles ནས་ and ལས་, and practice word sequencing for some short Tibetan sentences. You will also learn how to spell out loud in Tibetan.

When you’re ready to study Chapter Five, begin with 5.1 Grammar Preview and 5.2 Sentence Building. With those, you should be ready to try 5.3 Reading & Translation. You should also memorize the Tibetan grammar verse, review your grammar with 5.5 Sequencing Practice, and practice your pronunciation by following along with 5.6 Reading Aloud. Finally, in 5.7 you will learn how to spell out loud in Tibetan.

Professor Garrett demonstrates sentence building with a summary of Chapter 5.

Nas and las are used for the ablative, and for isolation and inclusion.
For the actual ablative, either form may be used.
For isolation from similar things, nas is used, and from dissimilar, las.
For inclusion, nas alone may be used.

Khenpo Kunga Sherab teaches us how to spell out loud in Tibetan, beginning with how to refer to the vowels when spelling simple syllables