Chapter 3: Milarepa annihilates his enemies with black magic and hailstorms 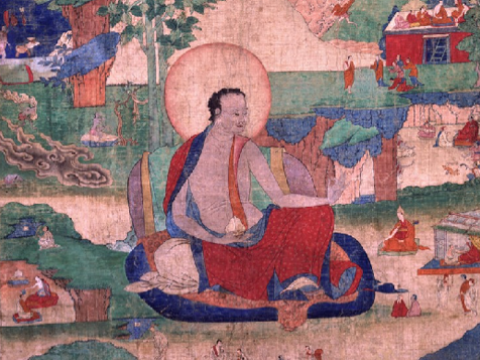 In Chapter 3, Milarepa uses black magic and hailstones to destroy his Uncle's and Aunt's village. In this Unit, you will read the third chapter of this abridged life story while continuing to learn new grammatical constructions and expressions. You will memorize a traditional grammar verse about ornamental and inclusive particles, and practice word sequencing for some short Tibetan sentences.

When you’re ready to study Chapter Three, begin with 3.1 Grammar Preview and 3.2 Sentence Building. With those, you should be ready to try 3.3 Reading & Translation. You should also memorize the Tibetan grammar verse, review your grammar with 3.5 Sequencing Practice, and practice your pronunciation by following along with 3.6 Reading Aloud. Finally, in 3.7 you can watch the first part of a two-part video lecture by the Gyalwang Karmapa, speaking in New Delhi in 2014, about the significance of Milarepa's life story for Buddhist practitioners.

Professor Garrett demonstrates sentence building with a summary of Chapter 3.

On the ornamental and inclusive particles

Kyang, yang and ‘ang are the three ornamental and inclusive particles.
kyang is used after ga, da, ba, sa and da-drak,
yang after nga, na, ma, ra and la,
‘ang and yang are used after syllables ending in ‘a or without a suffix.

3.7 The Karmapa on the Essence of Milarepa's Life Story

A lecture by the Gyalwang Karmapa, in New Delhi in 2014, about the significance of Milarepa's life story for Buddhist practitioners.